Most Famous Festivals and Events in Sicily

If you’re touring Sicily anytime between April and May, it’s a great idea to design your trip around some of the local festivals. We’ve handpicked a few which our sources have confirmed for 2022, with others still to be confirmed. Please check with your Classic Sicily travel consultant closer to your departure date for the best festivals in Sicily during April and May.

The much-anticipated Carnival of Sciacca is a colorful spectacle of floats, costumes and exciting performances.  It will take place in April through to early May. Similarly, the Carnival of Acireale boasts a magical atmosphere albeit a little more subdued. The locals decorate the floats with flowers, and they parade through the town. Acireale Carnival will be taking place in blocks from 22 April to 8 May.

In April, Cerda celebrates the product that made it famous, the humble artichoke. Italy is the largest European producer of artichokes, and Cerda is well-known around the world for its production. As a tribute to their beloved vegetable, a gigantic statue of an artichoke is always erected in the main piazza. This allows visitors, local residents and artichoke lovers alike to have a photo with this iconic statue.

The Artichoke Festival takes place annually on 25 April in a whirlwind of events and festive appointments. During the festival, in addition to various entertainment events, there is a free tasting of artichokes which can be cooked in different ways accompanied by local bread and wine. This is the ideal opportunity to get together in the town that has a dedicated monument to this precious vegetable. Artichokes improve liver function and digestive processes so are a real treat and panacea for the body!

Cerda, a hill town 60km from Palermo, lies at the foot of Pizzo della Guardia. It faces the valley where Mount San Calogero rises over 1,300 meters above sea level. An agricultural center famed for the cultivation of artichokes, its gastronomic tourism is now a consolidated reality. About 7km from the town are the Tribunes, a reminder of the legendary Targa Florio – the oldest road race in the world. 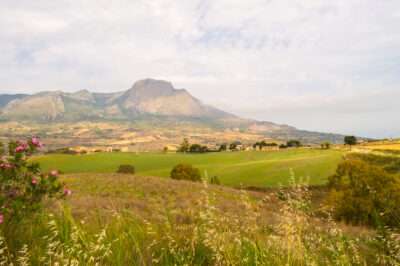 Other Attractions in Cerda

Another religiously based cultural event is the Table of San Giuseppe. Better known as the Virgineddi, it happens periodically on 19 March.

According to tradition from the nineteenth and twentieth centuries, a special table is set up for the poor in honor of the saint Guiseppe. Characteristic dishes such as pasta with sardines, la ghiotta (a mix of fennel and pine nuts), sfinci (egg sweets) and the usual bread of San Giuseppe – whose outermost layer is expertly decorated – are baked by numerous faithful locals.

The feast sees the participation of both adults and children, and the saint is remembered several times with the verse Viva Patriarca and San Giuseppi.

In Cerda, a visit to the Vincenzo Florio Museum is a must. It is dedicated to the Florio family and the Targa Florio. There you will find interesting photos, books, plastic newspapers, overalls and helmets of some poloti. You’ll also discover various relics including the Targa Fòprio of 1926, where the manufacturer of the Bugatti can be seen.

One of the oldest buildings in the area represents teh local artchitectural stylings – the Baronial Palace. It’s local name is the Palazzo Marchese and dates to around 1626. The building has a charming layout, typical of the local buildings and shows signs of renovations taking place.

The Carnival of Sciacca in the province of Agrigento is one of the best-known festivals in Sicily in April and May. The tradition is rooted in a popular festival, in which costumes, choreography and floats make the atmosphere truly magical.

Thursday night is reserved for the last float assemblies, where floats are placed in parade order along the outer road of the city and are assembled on site. People taken by curiosity follow the progress of the work and can get confused between the comings and goings of vehicles.

Locals are dedicated to finishing the work in a last-minute frenzy to be sure that everything is in place for the big day. Even if the floats are designed and built many months ago, the final products are only assembled on the street the night before the show starts.

On the day when the parade starts, two routes are followed in the historic center of Sciacca. The parades take place on Saturday as their first journey, then Sunday, Monday and Tuesday as the second journey. This is the week preceding the start of Lent.

The Carnival of Sciacca begins on Fat Thursday with the symbolic delivery of the keys of the city to the King of the Carnival – Peppe Nappa. It is the local mask that opens and closes the party. 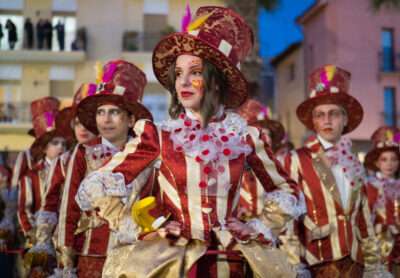 For the entire duration of the Carnival, Peppe Nappa’s float parades through the streets of the city distributing drinks and tasty local sausages prepared on the grill. On the evening of Fat Tuesday, at the end of the Carnival, the cart is burned.

Like the sound of Sciacca? Learn more about the best places to visit in this wonderful city.

The origins of the Carnival date back possibly to the Roman era, but more likely to 1616. This is when the Viceroy of Sicily Pedro Téllez-Girón, III Duke of Osuna, established that on the last day of celebration everyone had to wear masks. There is a historical and ongoing rivalry with the Acireale Carnival.

These first events are a popular festival, in which sausages, cannoli and a lot of wine are consumed. People pour into the streets disguised in their masks. After this, the best decorated floats are paraded, carrying the masked people on chairs around the narrow streets of the city.

In the 1920s a large, decorated platform joined the procession, dragged by oxen or horses, which brought more groups in masks. They performed in the local dialect, followed by small improvised orchestras. The stew, the sausages and the wine distributed represent a moment of meeting and exchange between fellow villagers.

After the war, the wagons were named and began to refer to the novelties of progress. Streamers and confetti are launched from the moving floats, creating a festive atmosphere. This entices the participants to become the real protagonists of a collective, communal joy.

A few years later, the delirious crowd gave rise to the first magazine companies. Even more sophisticated symbolic floats were set up that referred to local themes and characters in a satirical style.

With the arrival of sound amplification technology, the Carnival of Sciacca became more elaborate. The floats were set up with ever larger figures. The movements they were capable of became more and more sophisticated. The local political satire left more space for characters known to a wider audience or represented topical issues concerning national interests.

The floats and smaller mini-floats which are followed by the related masked groups are conceived, designed and built in the months preceding the festival by dedicated locals.

The Carnival of Acireale is one of the most beautiful carnivals in Sicily. It is one of the oldest on the island taking place every year with a parade of allegorical, flowered floats. In fact, it is among the top 10 most beautiful carnivals in Europe according to The Guardian in 2017. If you’re wondering what’s happening in Sicily in April and May, then this is definitely a highlight of the cultural calendar.

This Carnival takes place in the baroque-themed historic center, with its center in the Piazza Duomo. Joyous crowds actively participate in the demonstration, carried away by the cheerful and euphoric atmosphere. As it is coupled with the Viareggio Carnival, there is also the participation of some people with costumes from the Venice Carnival.

This traditional carnival includes an eye-popping parade of papier-mâché floats on Thursdays, Sundays and Shrove Tuesdays. The flowered floats parade on Mondays and Tuesdays.

In recent years the program is somewhat different. The allegorical floats also parade the two previous Sundays and the last Saturday. The flowered machines parade every day from the last Saturday to Shrove Tuesday. In April, the flowered floats, on the other hand, parade in a special event called the Carnival of Flowers.

However, the event closes on the evening of Shrove Tuesday with the awards ceremony and traditional fireworks where the Carnival King is subject to a special burning spectacle. 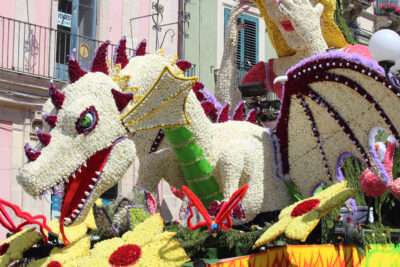 The 2022 edition of the Acireale Carnival will be in three sections. A first event will be taking place from 23 February to 1 March with the exhibition of miniature floats and the display of isolated masks. Then in Spring there is an event for the nine allegorical floats, on the 22, 23, 24, 29 and 30 April. This takes place again on the 1, 6, 7 and 8 May.

In summer, the Carnival of the Sea takes place from 10 to 24 July on the theme of migration. Learn more about the best things to see in Acireale.

History of the Acireale Carnival

The historical reconstruction of the Carnival, in a city like Acireale, is quite complex. From some old documents, we know that this anniversary was already celebrated at the end of the sixteenth century.

In the seventeenth century in Sicily there is the appearance of a mask with well-defined characteristics called the Abbatazzu. This is also known as Pueta Minutizzu. This person mimicked nobles or clergymen, carrying a large book from which he pretended to read out satirical jokes.

Following the earthquake of 1963, all carnival practices were prohibited. There was therfore a notable gap between the Acese carnival of the 1600s and the one that will rose up in the 1700s.

In the 18th century the tradition was revived. Other masks appeared, and the Barunis joined the Abbatazzu with the intention of making fun of the aristocracy. The mask was built from a costume resembling a noble dress but in a mocking fashion. Another mask of note was the Manti. It is a costume with many frills that had the sole purpose of maintaining the anonymity of the wearer.

In 1930 for the first time, cars adorned with flowers were seen on the parade. This is the first step towards the creation of the flowered floats which had a well-defined shape after the war.

In the 50s and 60s, the floats and flowered machines were flanked by mini-floats, called lilliput. These had small children on board as participants. Over the years some characters have made history with their jovial spirit and amazing masquerades. They have left an indelible mark in the history of the Acese Carnival. Of note is Cola Taddazza and Quadaredda, of which the most worthy successor, in later times was Ciccitto.

If any of these festivals interest you, please contact our travel consultants to help you to design a trip around them and the many other must-see attactions in Sicily. There are many more local festivities happening in Sicily throughout the year so do check with us when you travel.