Best Places To Visit In Sicily In Fall 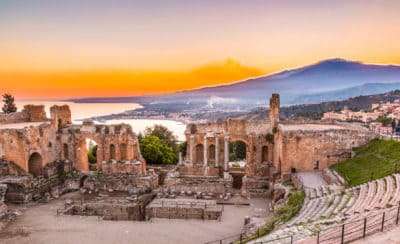 Without a doubt fall/autumn is one of our favorite seasons to visit Sicily. Aside from the odd rainy day, the weather is almost always perfect – a comfortable warm temperature conducive to sightseeing and relaxing.

Not to mention the gorgeous autumn folliage of orange and red hues together with clearer days which make for some unforgettable sunsets.

The fall also brings an abundance of food and wine – with the harvest of chestnuts, hazelnuts, olives and other seasonal produce. Locals enjoy a number traditional festivals throughout the season. In addition to tasting the typical products, tourists can experience the culture of the inland villages rich in history, culture, and art.

Here are some places we recommend visiting if you are fortunate enough to make it to Sicily in the fall/autumn.

The Magic of Foliage In The Madonie Park in Palermo

The Madonie Natural Park in the metropolitan city of Palermo represents one of the most famous mountain ecosystems in the Mediterranean basin due to the richness of its flora and its vegetation. No wonder it is called “the Alps of Sicily”!

Unsurprisingly, the autumn foliage here is a postcard of Nature, made all the more magical with the backdrop of Palermo. 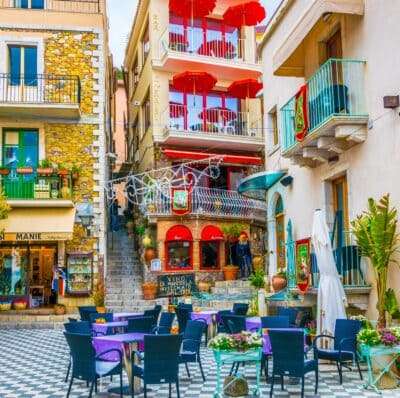 The suggestive village of Castelmola is that place where time has stopped in the true sense of the word. Magnificently perched on a boulder that rises above the wonders of Taormina, Castelmola is among the most beautiful villages in Italy.

It is rich in historical and artistic attractions such as the 15th-century Church of San Giorgio and the Museum of the Middle Ages Sicilian. The remains of the Castle of Mola – an ancient fortress that once controlled a vast territory from enemy raids from the top – boasts a view of Etna. This majestic volcano is the highest in Europe with a mighty presence felt via spectacular eruptions and columns of smoke.

Sambuca of Sicily and the Mazzallakkar Fortress

Awarded in 2016 with the title of Borgo dei Borghi, Sambuca of Sicily is a truly fascinating village located a few kilometers from the sea and is a real treat to visit during fall/autumn.

In fact it was the third Sicilian municipality to win the title of most beautiful village in Italy after Gangi in 2014 and Montalbano Elicona in 2015. It boasts Arab origins that are still perceptible today by observing the architectural structure and walking in the Vicoli Saraceni district of ancient streetscapes.

This village in the province of Agrigento has numerous artistic pieces on display, like the Orange Lake in the Valley of the Mills. With a view of the Mazzallakkar Fortress – a 1000 year old example of fine Arab architecture – it is no wonder it is one of the top places of interest in Sambuca of Sicily.

Many of our pre-designed tours allow you to visit the best of Sicily in the fall. If you wish to taste the seasonal produce, why not consider our tasty Flavors of Sicily tour. Or if you are into the history, why not try our Historical Sicily tour. You can also inquire with us about how to design your own tour of Sicily.