Famous Churches of Acireale in Catania

Acireale is a charming town in the province of Catania, located on an old lava field plateau overlooking the sea. It is a city with ancient origins, and today the urban layout of Acireale is typical of the late medieval cities of Sicily.

The city center is known as Timpa and thanks to it being 160 meters above sea level allows for excellent views of the Ionian Sea. The coastline boasts lot of steep cliffs and is shaped by existing volcanic activity in the area.

It is renowned for its buzzing local life including the famous carnival in April/May. One of the most extraordinary sources of attraction of the city of Acireale are its marvelous ornate churches.

Some of the most admired buildings in the area include the Cathedral of Maria Santissima Annunziata Church of Sant’Antonio da Padova, the Church of San Domenico, and the Church of the Holy Apostles Peter and Paul.

Not only does their exterior beauty attract tourists in the thousands, but also the awe-inspiring interiors too.

The Cathedral of Maria Santissima Annunziata is the main city place of worship in Piazza del Duomo in Acireale. The church has a Latin cross shape with three naves. After the establishment of the diocese, it was joined in 1874-1878 by an overpass to the Episcopal Palace to the north – designed by the architect Carlo Cocuccio.

The site actually boasts an entire complex of cathedral, bishop’s palace and ecclesiastical buildings on via Genuardi. Their internal courtyards are joined to the Basilica of Saint Peter and Paul, constituting a veritable citadel.

Of considerable value both historically and aesthetically on via Genuardi is the atrium that leads to the complex.

The interior was modified in the prevailing style in the 18th century following the earthquakes of 1693 and 1783. The fercolo that houses the Simulacrum of Santa Venera in the period of the celebrations is also found here. It is created from chiseled silver and dates from 1659. The sculptor Girolamo Carnazza and the goldsmith Mario D’Angelo were responsible for its creation in 1660.

Discovery of a Crypt in the Cathedral of Acireale

The Diocese of Acireale has recently announced the discovery of a crypt in the location. It has a wonderfully authentic fresco depicting Jesus crucified with souls in purgatory. Enveloped in flames at his feet under the pavement, it can be found at the Cathedral of Acireale.

The discovery took place during some architectural studies that involved the most hidden aspect of the building. The aid of thermographic and endoscopic equipment made it possible to ascertain the presence of a sepulchral compartment below the pavement of the Basilica. This occupies what was once a cemetery area.

It was possible to access the crypt after removing a portion of the flooring. The room is in a good state of conservation in regard to plasters, wall structure and drains. 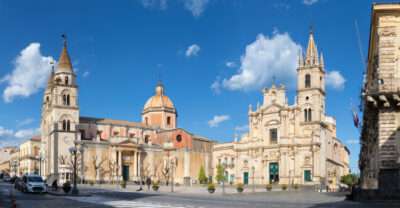 The Church of Sant’Antonio da Padova

This is generally considered to be the oldest temple in the city with origins dating back to the plague epidemic of 1466. The inhabitants of Aquilia Nuova erected the building in honor of San Sebastiano who was attributed to the eradication of the disease. San Sebastiano was proclaimed co-patron of the city, and the larger basilica was built and dedicated to him.

The establishment of the new temple dedicated to the civic co-patron was made on July 13, 1652, on the basis of a common agreement between the Confraternities of Sant’Antonio and San Sebastiano.

The church stands on Via Vittorio Emanuele near where the ancient south gate of the city once stood. The terrible earthquake of 1693 devastated the entire Val di Noto. It caused serious damage to almost all the buildings and churches in the city of Acireale.

This structure, which had been dedicated to Saint Anthony of Padua in 1652, was almost completely destroyed. The sacred building was later entirely rebuilt, and today it is characterized by a mixture of styles. Of the ancient building remains the fine portal made of white Syracuse stone in a late Gothic style embellished with typical Catalan stylistic features.

The small bell tower which is aligned with the façade was built in Baroque style and features decorations in the same white stone and Etna basalt.

Partially remodeled with the addition of the bell tower and an extension of the facade, it was entirely frescoed in 1755 by Pietro Paolo Vasta. He fell unconscious while painting the vault and fell from the scaffolding at height and became a paraplegic.

The work was subsequently continued by his son Alessandro, who later painted great works such as the Ecce Homo and the Immaculate Virgin. The frescos in Santa Cecilia and San Cristoforo were created by Michele Vecchio.

Another gem in Acireale’s historical crown is the Church of San Domenico, among the oldest and most magnificent churches in Acireale.

Originally the church was built in the first half of the 16th century and was dedicated to St. Joseph, the husband of Mary. It also gave its name to the neighborhood in which it stood.

The church was enlarged in the 17th century and was rebuilt in 1709 following the earthquake of 1693 which damaged it. The elegant façade with decorative statues and high reliefs was only built in the 19th century. The first opening for worship dates back to 1590, but it was only later in 1639 that the Dominican friars settle in the adjacent monastery.

They introduced the cult of San Domenico and then that of the Beata Vergine del Rosario, after being in continuous conflict with the brotherhood of San Giuseppe.

The facade of the church is modern and bears the iconographic signs the Dominican order hold dear. The interior has three naves, with the main altar dating from the 19th century being less decadent than the other eighteenth-century side altars. On the right altar there is the canvas of the Madonna del Rosario with Dominican Saints made by renowned artist Matteo Ragonisi.

The frescoes by Alessandro Vasta greatly enrich the artistic heritage of the church. On the left aisle, however, the most important fresco is the Lamentation at the foot of the Cross. It depicts the virgin with John the Apostle, Mary Magdalene and some other pious women mourning at the foot of Jesus’ cross.

The side aisles are surmounted by other items of distinguished workmanship, such as the Pentecost by Giacinto Platania. The Church of San Domenico is a must-see for its beautiful works of art and its unique Ionic style.

The Collegiate Basilica of the Holy Apostles Peter and Paul

The construction of the church dates back to the 16th century. In 1602, the rectors of the brotherhood of St. Peter decided to give the church to the governors of the Matrix, needing additional space for their factory expansion.

Thanks to the proceeds from the sale work began in 160 8on the construction of the new sacred temple. It was erected only a short distance from the previous one. The interior has a single nave and is equipped with a large sacristy and a body of side chapels.

These were enriched between 1674 and 1679 by frescoes by the painter Giovanni Fulco with scenes from the martyrdom of the two holy Apostles. Also in these years, the building was equipped with a worked wooden attic, stucco and plaster made according to the architectural style of the 17th century.

The destructive 1693 earthquake destroyed the dome and caused serious damage to the entire structure. Starting in 1705, the rectors of the church worked to find the money necessary for the construction of the bell tower which was built in the Sicilian Baroque style.

The building has an elegant façade in white Syracuse stone built in the first half of the 18th century. It was based on a design by Pietro Paolo Vasta. The façade is characterized by the superimposition of two orders of columns. On the right stands the bell tower finally built in 1735. The choir is built in the counter-façade.

The church, erected as a collegiate church in 1924, was elevated to the rank of a pontifical minor basilica in 1933 by Pope Pius XI. 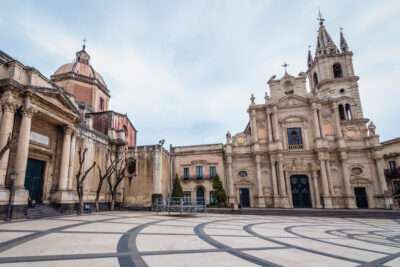 If visiting Catania, be sure to squeeze in a trip to Acireale. Our travel experts would be happy to design a trip for you with all the sites and tours you wish to see.