Ferragosto is an Italian Mid-August vacation which takes place on the 15th of August. The 15th itself is a public holiday. Most businesses (apart from tourism and hospitality) shut down for at least that week, if not the entire month. And being summer, it is a time when Italians go on vacation – either abroad or to Italy’s coast or to escape the heat in the mountains.

Sicily has long been one of the favored regions to spend Ferragosto. It has maintained many of its festivities and traditions for locals and tourists to enjoy. Sicily’s capital, the province of Palermo is a city with beaches such as Mondello and mountains nearby. Palermo boasts some of the best accommodation and accessibility to make day trips to other famous coastal spots such as Cefalu’, located just 40 minutes away by car. Therefore, it can be a viable option for Ferragosto which might not be as crowded as other coastal or mountainous towns.

The significance of Ferragosto to Italians

Dating back centuries, Ferragosto traditionally marked the end of the harvest season. Friends and family would get together to enjoy the fruits of their labor. The celebration also coincides with Assumption Day, the Catholic feast day which marks Mary’s ascent to heaven. Nowadays, it continues to be celebrated as a mid-year break to take respite from the daily grind.

Many of the religious celebrations have remained in some cities. Palermo being one city where you can catch a glimpse of some long-standing Ferragosto traditions surrounding food and homages paid to Mary.

Palermo is a colorful city famous for its the extraordinary works of art. From the historic center to the sea, there are many things to do in the Sicilian capital in August. Wandering the alleyways and squares of the historic center, takes you on an endless discovery of artisan shops, typical trattorias and street food.

Nearby in a fishing town called Trappeto, families decorate and name their boats for the Ferragosto festivities kicking off with rowing races. First large boats with all the crew followed by smaller boats with four men at the oars and a helmsman. The whole town of Trappeto gets involved and the atmosphere is electric.

Each year, a head of the family takes turns decorating his boat to host the simulacrum at dusk waiting for the sea to become calm with torches lit. At the waterfront, there is handicraft and tasting of typical products on display. Parties and concerts spill out on the main streets and squares of the city.

Celebrations then continue with the “Antenna a Mare” race, where everyone aged thirteen and up can participate. It is a great moment of encouragement because winning that race has always been a source of pride. A fish festival is held in the afternoon, followed by mass and then a procession with the statue of the Madonna through the narrow streets of the village. 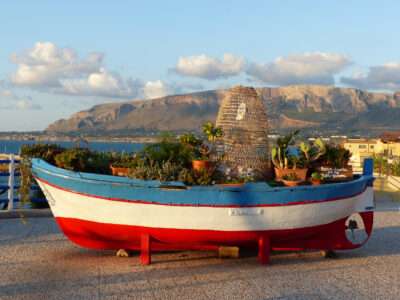 With reference to typical, folkloristic events, the feast of Maria Santissima Assunta (the Assumption of Mary) takes place of on the 15th of August in Trappeto. The statue of the saint is carried in procession to the sea, accompanied by the faithful.

Celebrations in honor of the patroness Madonna Assunta have taken place since 1897. Considering that the small church is located a few steps from the sea, all traditional popular activities were carried out in “Lo Scalo”, a small habor and the historic center of the town.

For over twenty years, the Congregation Maria SS. Assunta faithfully reproduces almost all the activities carried out in the past. Trappeto is one of the few towns in the Province of Palermo that carries out the procession to the sea on August 15th, being in the center of the Gulf of Castellammare.

The celebrations are of particular significance, both from a religious and tourist point of view. The atmosphere is enhanced by the presence of the many visitors to the coast. One such guest is His Excellency, The Archbishop of Monreale, who delivers a Holy Mass.

On August 15th at 7.00 pm, a “maritime” Procession of the Madonna on the sea starts with boats lapping the entire Gulf. The party ends with a concert by a great nationally renowned artist in the main square, Piazza Municipio.

If you plan to visit Sicily in August and are interested in seeing any local traditions such as the ones mentioned above, please contact us to help design you perfect vacation. You may also browse any of our itineraries which include Palermo and its surrouds.