Sicily’s lucky charms and other symbols

Introducing you some Sicilian symbols that are often seen in Sicily. They reflect the island’s rich history, but their meaning and origin are not always obvious at first glance.

We have laid them out for you. Be sure to brush up on their meaning and check them out when there. That way you can know their back story.

In Sicily, “Testa di Moro,” or Moor’s Head, is a traditional characteristic symbol of Sicily, recognizable around the world. These hand-painted two ceramic vessels in the shape of two heads are frequently found as flowerpots or just for decoration: a man with a beard or moustache and a beautiful young woman.  They wear turbans and crowns and have their heads richly decorated with flowers or fruits. The man is usually of dark complexion.

They are most often displayed in pairs on the balconies of Sicilian houses and on the sides of sunny terraces in country villas. You can also find them displayed as valuable objects inside homes in Italy and around the world.

The significance of the Testa di Moro 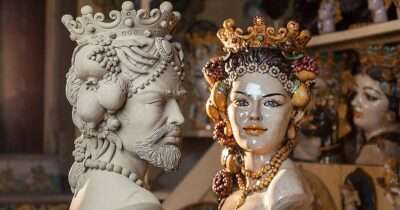 The Moro heads have now become an emblem of Sicily. They are most appreciated by Sicilians, but also by all Italians and foreign tourists, who see in them an artistic expression characteristic of our land.

Today the Testa di Moro is an increasingly popular design object. It is often large, finely hand painted, with a crown on its head and gorgeous jewels around its neck.

The Testa di Moro is certainly linked to the period of Arab domination in Sicily, between the 9th and 12th centuries. Very similar to those of the Arab population, and the decoration of the crown, which symbolizes the people who reigned at the time.

The origin of the Moorish heads in Sicily

What is the sto 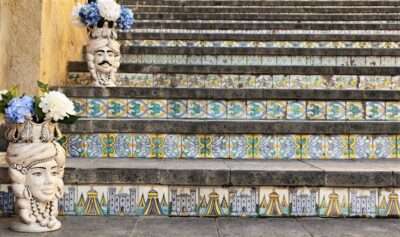 ry behind the Sicilian Moor’s Heads? The true story of these objects is unusual and fascinating.

Legend has that a girl living in Palermo‘s Arab district, the Kalsa, was tending to some plants and flowers on her balcony. Suddenly, a dark-skinned merchant passed by, and they instantly fell in love. They started their love story together until the young girl discovered that her lover already had a wife and children back in his home country.

One night while he slept, the girl devised a plan to keep him with her forever! She cut off his head without blinking an eye.

This way, her beloved would never leave her again and always stay with her. She then decided to use it as a vase to grow her beautiful basil. The basil grew so well in this pot that that became a source of envy in the neighbourhood. So that they could also get such beautiful basil, they had the potters make flowerpots in the shape of a Moor’s head.

Such heinous fanciful tales are seldom told. Today the two heads have become a symbol of Sicily and Sicilian craftsmanship. 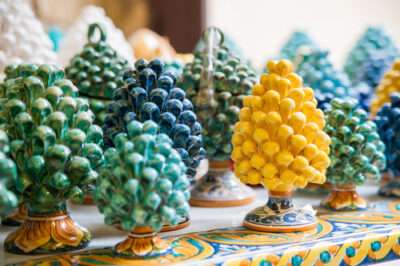 Ceramic pine cones are commonly seen on balconies, walls, and next to gates in Sicily.

As an evergreen tree, the pine represents health, vitality, and constant renewal, as well as the divine, eternity, or immortality. With its hundreds of seeds, the pinecone represents fertility and prosperity. A ceramic pinecone is traditionally given as a wedding gift to young couples.

However, the lucky charm is now a welcome gift on other occasions and a nice souvenir from Sicily. 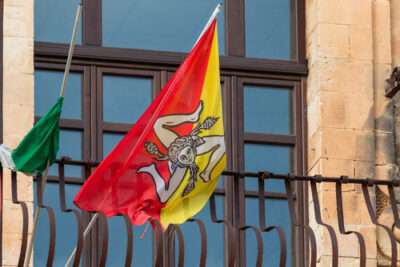 The Medusa head is also used as a good luck charm and to ward off evil in many places, such as on doors, as shown in the photo below. 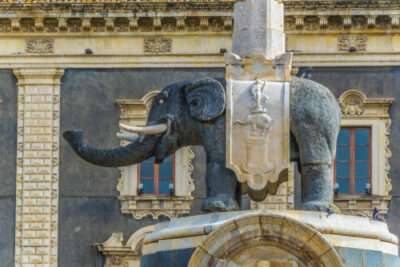 Catania’s coat of arms features an elephant, and an elephant made of Etna’s lava rock stands in a fountain in the cathedral square.

There is an old legend about how Catania got its elephant. When the inhabitants first arrived to today’s Catania, it was home to many wild, dangerous animals. An elephant is said to have chased them away, and the people of the time erected an elephant statue in thanks.

Other theories hold that Byzantines erected the elephant figure during their rule to protect it against Etna. This worked for a while, but in 1669, Catania was almost destroyed by lava flows from Etna’s lateral eruption.

Many of our pre-designed tours incorporate private tours of the Valley of Temples in Agrigento such as our luxury trip Sicily 12-night tour and Essential Sicily 8-night tour, among others. Or inquire with us today about how to design your own tour incorporating sites such as these.